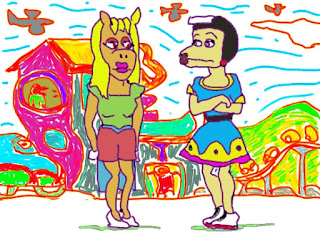 Last week someone wrote me that my website, funonmars.com, was down. I was surprised, went to check and saw this message.

Suspended? But I paid a few years in advance. Then I checked the web hosting site, which I've been using for more than ten years, and it too was suspended.


Yikes! Then I came to this blog thinking I'd write about what happened, (after ignoring the blog for two years), and it looked weird too, because all the Flash files that surrounded it, which I coded furiously to put in place, are vanished in the cloud that was.... Although I still have most of the files, it would be a crazy venture to try to put it back together again. I grabbed the generic files to make it look like a blog again.

Losing this website makes me sad, and made me think back on all the changes it went through. I started my own site around 1997- a long time ago on the internet. At first I just used the free space earthlink allowed. Small file size was key, so I came up with a design that I thought would work to carry a story via gifs, the only animation format that seemed available then.

Starbucks was just getting going on its colonization of neighborhoods, and I decided to tell the story of two gal pals, Anita and Whinsey (a horse) as they met over burned brew at Charbucks. By keeping them in a frame, and sitting at a counter, the file size was small. 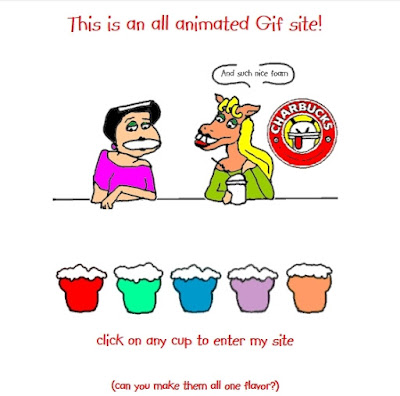 Above was a little JavaScript game where you could mouse over the cups to change their colors, but it was hard to get all five with the same color. (and it no longer works- don't bother.)

Later I retold it in a Flash version. https://www.youtube.com/watch?v=Y2F1Af7nx0Y
Oh and do I love youtube? NO! Almost 3 million views of my videos, not even $250 paid back. But that's another story.

It played on a conspiracy theory that Charbucks workers were being brainwashed and kept in the basement.

I had little napkins which when you rolled over them contained handwritten messages.

I put together this part of the story in a Flash video too, but those videos never caught the goofiness of the original gifs I thought.

Gradually I fell into the code world and taught myself much too much about code. I just loved the idea of making my animation interactive. First I learned JavaScript, by taking examples on the web and switching out my images or my variables. I didn't know what I was doing but I learned a lot! . But the trouble with the digital world, one of many!- is that things become obsolete so fast, code systems that worked in earlier browsers crash in contemporary browsers.  I really wish I'd done more screen shots at the time. 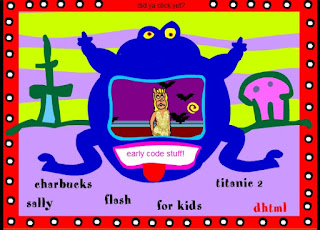 In 1999 someone named sada/exposada in the Netherlands invited me to beta test a program which could create animation from jpegs and gifs. I managed to get my two girls, Anita and Whinsey, on board the Titanic 2, part of a story idea I'd had since the 1970's. I built an extensive story with a pictorial map you could follow to get from episode to episode. The entire story comes up as a blank page in the Wayback Machine. aah! 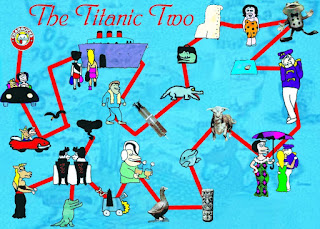 Every one of the images in the map linked to a separate episode.
You can't imagine how extensive this website was. I used Beatnik music- another obsolete format.

I tried another code system where scripted clipping would create animation- I'd explain it more but what's the point- it doesn't work anymore either.

Maybe I'll write about Flash in another post. I feel about it the way some people feel about ex partners. "Why did I waste all that time?" Enough for now. 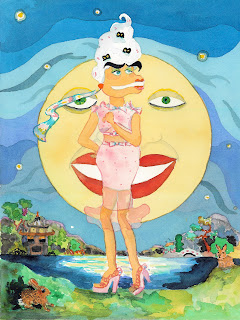 I painted eight illustrations of contemporary fashion a few months ago. They're coming out in a fashion magazine called Hot & Cool, in the UK tomorrow. I've listed the originals on etsy just now: Take a look. This one's a dress by Christopher Kane.