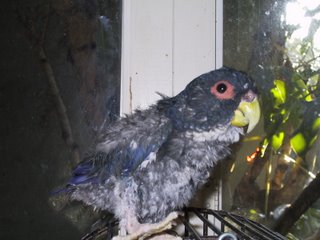 I've been feeling gloomy since the sudden demise of my bronzed wing Pionus, Kokomo, who was about fourteen years old and had been with us since before the Northridge Earthquake. Birds don't show symptoms of illness until they are very sick, and I have no idea what went wrong.

I was his principle person all his life, but he hated me and would scream when I came in the room. I loved him anyway. He was a feather picker, and disturbing to see, as he looked as if he was headed into the oven. This picture is from the start of his feather picking days.

We had another parrot, Big Boy, who really loved me, but he's been gone four years now. He flew away, and I always have hoped he landed in a back yard where someone made him a pet. Once he was quite ill and went to the bird hospital. They told me I could come see him during visiting hours. I went for my visit and was admitted into the room. They brought Big Boy in. He looked at me, struggled with his tongue, then said, "You poor thing."

I guess we won't be getting more parrots. If we move to Colorado, it will be too cold for them. I've been having troubles with aging animals generally. My horse Pepper is not really interested in being ridden anymore, at age 23, though he still loves to run and buck if I'm not on him. And last summer dear old Luna, my first horse, went on to the big corral. So it's been tough adjusting to life without riding, which may sound quite spoiled but I really love to ride.
Posted by Sally at 10:21 AM 1 comment: