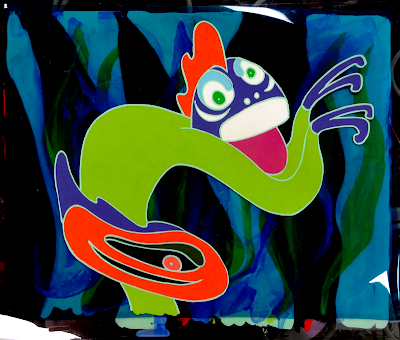 We've been printing many of my films in 35mm this last month, for archival reasons, and checking the prints at the Fotokem lab in Burbank, in a screening room.

I'm always uncomfortable looking at my own work, but when I saw these prints at Fotokem I was shaken up a bit. Film looks SO GOOD, so totally different from any dvd or digital format. Geez! Animation! Cels! But only a handful of specialty labs are even printing film now, and in the years ahead all the studio releases will be coming out as digital only. (2014 already declared by studios as no film releases anywhere.) So if you have film negs think about printing them now.

Although my cartoon "Quasi at the Quackadero" was put on the National Film Registry list of films worthy of preservation, the list comes with no perks as to preservation (or even a piece of paper to frame and put on the wall!) In fact even the link to the pdf which came to me as official notification was a broken link!
Government.

Film is the latest obsolete format. wow! The world is becoming so damn virtual.

I've often wondered if the monster magnet from outer space really appeared what would happen to our collective culture? Then the Republican candidate I find most unappealing, (though it's hard to narrow that group down),Newt G, mentioned this in some recent debate as a real threat.

I'm going to write about my own computer history. I poured so much energy and YEARS into Flash, and before that into some other formats that also scream obsolete format.