I went to visit my mother at her retirement community and had a computer free week. I really enjoyed reading an assortment of novels and non-fiction, and with my mind disconnected from the internet could really think about them.

The two classic banned books I read were "Huckleberry Finn" and "Catcher in the Rye." I'd read "Catcher in the Rye" a few times before, but somehow never "Huckleberry Finn." Of course on the scale of banned books these are such innocent low weights, but they appear on many of those stupid lists. It was just coincidental that I read them together-- I only put the connection together later.

The first third of "Huckleberry Finn" is very great, mysterious, original, and moving. I didn't expect it to be that good. Then it takes a big narrative shift with the entrance of two con artists/pitchmen, the King and the Duke, and turned into a very different book, which I didn't particularly enjoy. By the time Tom Sawyer enters near the end I was quite sick of it.

But the edition I was reading was annotated, (and also included the original illustrations), I learned he took a break from the book at just the point where the tone changes, and returned to it four years later. The magic was gone by then. Jane Smiley wrote a defense of "Uncle Tom's Cabin" at the end of this edition! Wow, there's a new point of view. Actually it made me want to read the book!

"Catcher in the Rye" still kept me involved. As I first started it, it seemed so involved in a prep school vision, but then that fell away for me, part of a world described that no longer exists. There are moments when he writes things that no one else has ever written. That's how it struck me at least.

I read an awful short story in "The New Yorker" by Louise Erdrich. I remember reading an early book of hers where the descriptions were so beautiful they took my breath away, but this story had a character with a "mop" of brown hair and sensitive brown eyes. geez.
Posted by Sally at 7:35 AM No comments:

Labels: reading, the past, think about it

The Land of Make Believe 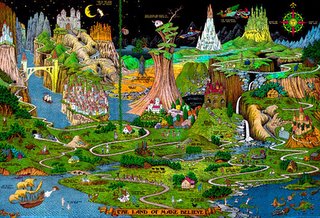 When I was little I had this poster on my bedroom wall. It delighted me. I could explore this world. The image is laid out in a way that makes it easy to enter and travel around, in your mind. Later in the hippie years it was sold in head shops. I was never a hippie by the way. I've learned the artist's name, Jaro Hess. It's from the 30's. I don't have a copy anymore, but maybe I'll order one.

I've been working on a new Whinsey/Anita story in flash. I'm using the IBM text to speech voices-- not quite what I'd like but by grabbing voices to use in the animation it makes me more likely to continue with the project. My old source for text to speech voices is no longer available. If I had to get a microphone etc. I would probably just not do it.

I feel sort of like Tinkerbell in the Peter Pan tv show, begging for claps to fly, asking for encouragement to continue. Actually I've received so many nice emails from total strangers who've enjoyed my animation over the years, and I think that, (plus total lack of work), is what's gotten me started on a new project.