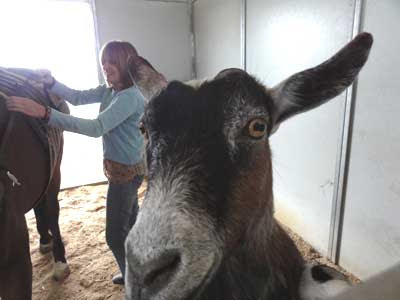 We flew up to Sacramento to see Dinah at Davis- loved seeing her stable too with horse Tia getting in shape after her colic surgery earlier this year and the goats as uncontrollable as ever. 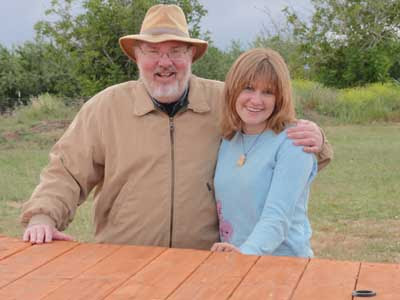 Dinah's heading to Peru this summer on an Amazon research trip. We're headed to Colorado in the morning. Happy Birthday to all my friends whose birthdays fall in May (the majority of friends my whole life.)

(I just realized the title won't make sense to anyone who doesn't remember the tag line to Ghost Busters)
Posted by Sally at 6:26 PM 8 comments: 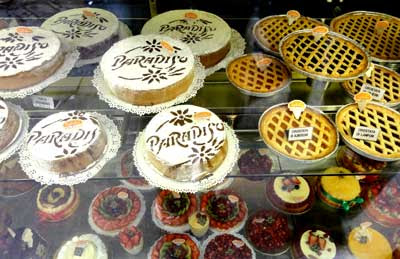 Can you believe I asked Jon to take this picture but didn't go inside? "No, no", I said, "I just like to look." It's true: I love to look at nicely displayed bakeries and candy stores, especially when they use shiny printed tin or cellophane. Some of the tarts in this display have wild strawberries on them! Paradiso!

But what was I thinking "just looking"? Everyone talks about Italian food so what I say won't matter. I could never get past course two so never had any desserts. Heartbreak.

The last night in Florence I went into a really pricey chocolate store and ordered a very small custom box of filled chocolates, two of each, thinking if I liked the taste I'd share it with Jon. NO SHARE! I didn't eat them till I got home and they were exquisite. One had champagne inside that dribbled right down my chin. Another had an apricot inside with the pit still inside the apricot. I wish I could go back and buy one of everything in the store just for me. 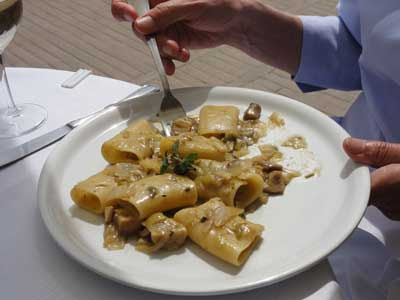 These were ravioli. They made me feel like I was really small because they were such giant tubes, in a walled Medieval city. They were really good, just fennel and leek but they probably snuck some animal thing in there because they even serve salami at breakfast in the hotels we stayed in. 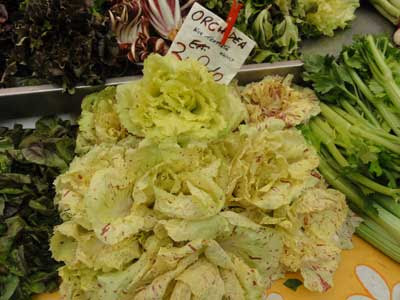 Such pretty lettuce. We went to a great farmer's market in Genoa for more "just looking." Genoa is a nifty place to visit. 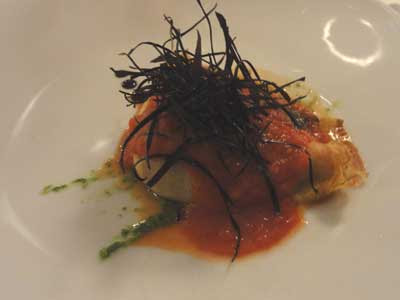 Our last night in Rome we were sent to a restaurant by the hotel, (and that's not a good idea. There's some kind of kick back going on.) We were served this artistic starter, which was filled with a wonderful artichoke mousse, but then my main course, sea bass first shown to me on a big platter before anything had been done to it, (John the B?) was sea bass with cheese sauce which didn't seem very Italian and was a bit creepy.

Blogger seems to have a limit on pictures to post. I was an experimental eater in Italy: whatever sounded weird but within my range I'd order. Why not? After a very weird sea food pasta Jon stuck to tomato sauce. I think the dishes he ordered were probably tastier, but now I know what not to order!

The regional thing is sometimes claustrophobic but sometimes terrific. Anywhere in Lucca where you ordered bruschetta it came with gloppy chicken liver topping. EUW! In Genoa a wonderful artichoke quiche like thing was on all menus. (no spiky chokes.)

Loved that all our hotels served blood orange juice for breakfast, even if sometimes it seemed to be cut with Kool-Aid. Campari Orange is a wondrous drink in Rome and comes with a grilled cheese sandwich whether you want one or not.

Truly disgusting that horse is on the menu but they don't provide translation. Figured it out too late or would have definitely boycotted a restaurant in Rome where we had lunch twice.

So how's that for the uninformed traveler passing through one of the most elegant gastronomic areas in the whole entire world?

Worst meal? Pizza! Right outside the Vatican!
Posted by Sally at 6:20 PM 9 comments: 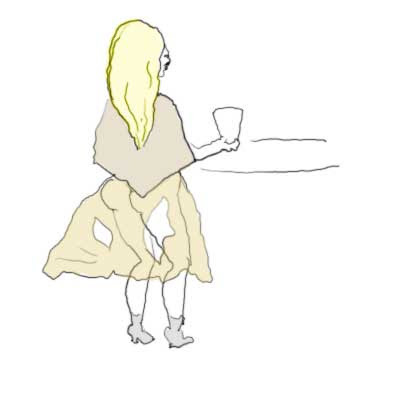 The oddest fashion we saw our entire trip to Italy was at the very outset, in New York. We wandered into a very popular "French" bistro in Soho, Balthazar. The food was good and the room was filled with good looking people, many of them waiting for tables. We sat at a tray sized table next to the bar.

"Waiter, there's a fanny in my soup!"

A blonde walked up to the bar with her friends and ordered a drink. Do you know what tulle is? That stiff fabric ballerinas wear that you can see right through?

This gal was wearing a beige tulle skirt cut all different lengths and sticking out in all directions. It had big GASHES cut in the back of the skirt. I think she was wearing a thong under it, but I didn't check.

Her rear end was almost on our table. I mean I could have poked her with my fork. On the top she was wearing a shawl made out of burlap, the fabric potato bags used to be made of. Her friends all looked stylin. She kept clutching at her shawl but honey that wasn't covering the part that needed covering.

It really looked like an outfit from a classic bad dream but she made the choice to wear it, and we had to look at it.
Posted by Sally at 1:30 PM 6 comments:

The Dogs of Italy 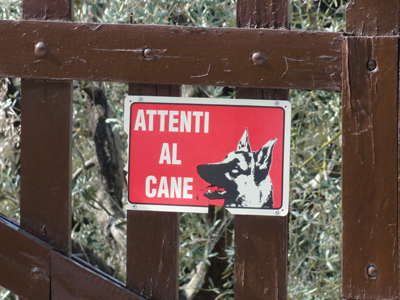 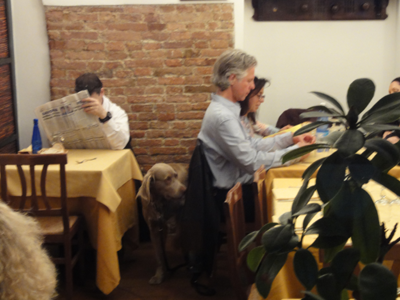 When I saw how welcome dogs are in restaurants and hotels, I was sorry we hadn't considered bringing Molly along. But not sure I could deal with a dog's jet lag as well as my own. "Sally, It's 2 am! Time for our walk!" 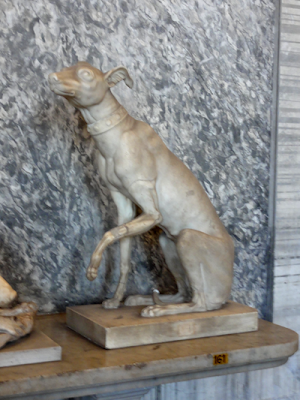 Most of the dogs in Italian art look like Italian greyhounds. Surprise! 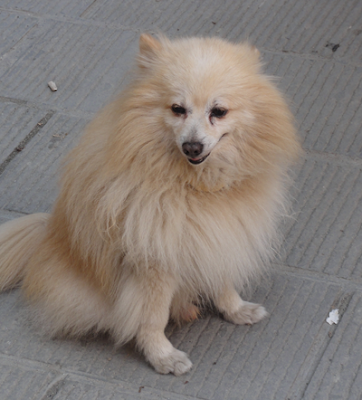 This old dog lived in the Cinqueterre on the Italian Riviera.

I'm surprised dogs don't smoke cigarettes in Italy. Everyone else does.
Posted by Sally at 10:24 AM 5 comments: 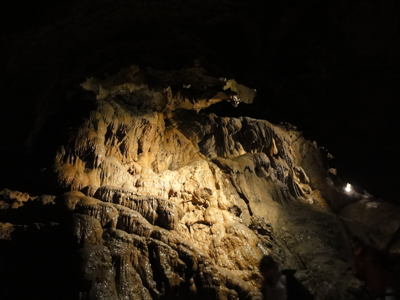 You see so many pictures of Jesus in Italy that it gets on your nerves, even if you did study medieval art for 3 semesters. We needed something else. We were staying at a goofy hotel in Lucca where the three guys at the desk seemed to be Manny, Moe and Jack.

Anyway, I found there was a cave tour somewhere in the mountains and we took a drive, first to the beach at Montereggio, then up a road of many switchbacks to Grotta del Vento, not too far from Castelnuova. When the metal door slammed behind us on the cave tour, I wondered if my claustrophobia was going to kick in, but I remained at ease, and was so surprised by how the cave looked like the inside of someone's stomach. It was wet and oozing.

I've been really wiped out since our return. This morning I woke up suddenly when the bagel in my dream had a baby alligator stuck in the cream cheese. It was not quite 4 am. I meant to blog an orderly trip through Italy but that may never happen.
Posted by Sally at 6:45 PM 8 comments: 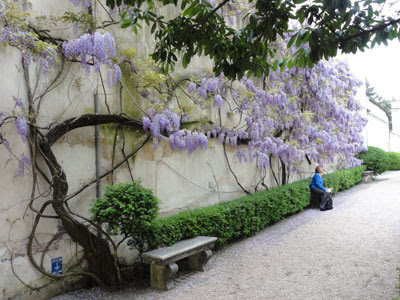 Jon took this lovely picture in the courtyard of the National Etruscan Museum, in the Villa Giulia part of the Villa Borghese Gardens. Gone were the miserable shuffling hordes at the Vatican Museum, (which Jon described as the tenth circle of hell though Dante only knew 9!)

This museum was peaceful, nearly empty, and full of wonderful art by the Etruscans, an early Italian civilization about which much is not known, even now. They even had an alphabet that's never been decoded. 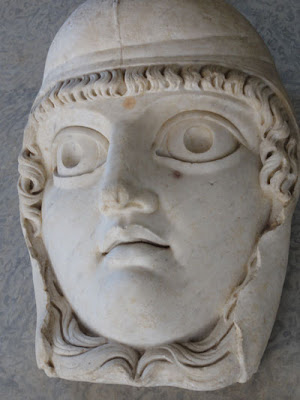 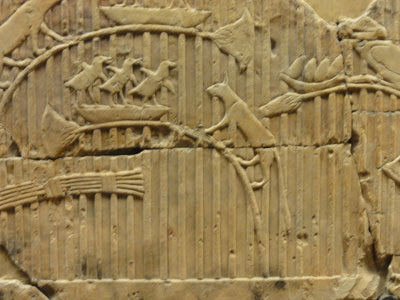 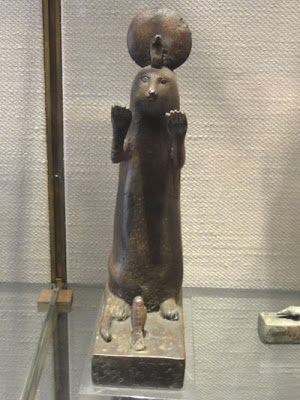 The image below is the style of art they're best known for. 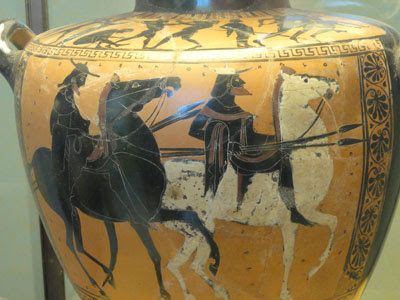 I called my mother the morning I got back and the S.S. Dementia had docked. "I'm in London," she said. "Where are you?" She was upset I hadn't gone to London to meet up with her and sounded very agitated.

This morning she didn't sound agitated, but she answered by saying, "Have you heard the terrible news?" "No, what?" thinking uh oh.

"The beads are missing, and everyone's in an uproar. Without the beads the race can't be run.
People have looked for them everywhere. They've even called in the FBI."

She had to get off the phone because she was off to New York, but she'd call me when she got there, around noon. I'll be at the races then, hmm, maybe I'm a suspect. I do have some goofy beads I sometimes wear to the racetrack . But don't tell anyone! Don't tell the FBI!
Posted by Sally at 9:12 AM 7 comments: 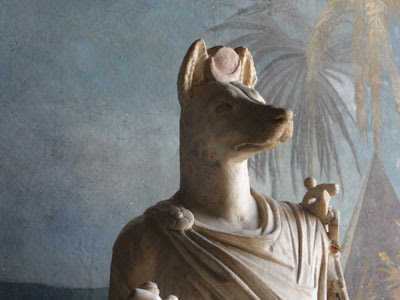 In our house in Northridge, above the ice machine, there's a special feature pointed out to us when we bought the house long ago. It's a slide projector shelf set up so you can show slides of your travels when guests come for dinner, while they're still stuck at the table.

The Power Point presentation of its day.

"Hey, why's everyone leaving so soon?"

Faced with 600+ pictures from our trip to Italy I hope I have the good sense not to pull out the slide projector here on the blog.

We saw some great art, really great art, first in New York at the Frick and the Metropolitan, and then of course in Italy. 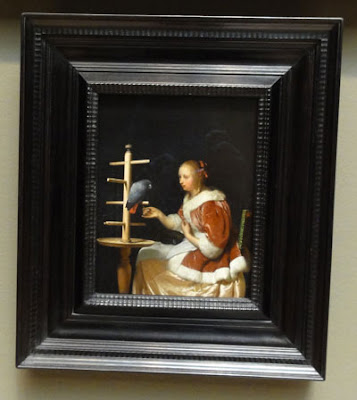 This parrot painting was in New York.

In Italy there are way too many paintings of John the Baptist's head on a platter. People, please! Or of Judith doing the same thing to Holofernes. Why did artists think this was something they should paint?

The platter paintings were especially awful because the whole concept of Italian eating in restaurants is based on course after course, platter after platter, and they never let you start with dessert so we never reached that course. 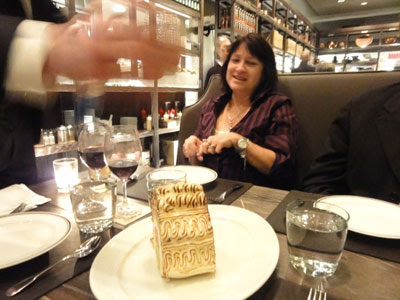 This was the only dessert we ordered during the trip, and it was at an obnoxious restaurant in NYC on the lower east side. The waiter was a bully and we only ordered this so called "Baked Alaska" because they seemed to have an "eat it or beat it" policy in effect and we wanted to yell at our friends a little longer. It wasn't really Baked Alaska which is meringue baked around ice cream but they can get away with calling it that because they're so hip and the restaurant is so noisy no one would hear you if you complained anyway.

The first picture is an Etruscan sculpture. More on Etruscan art later. No, you can't get up from the table. Sorry.
Posted by Sally at 5:41 AM 4 comments: 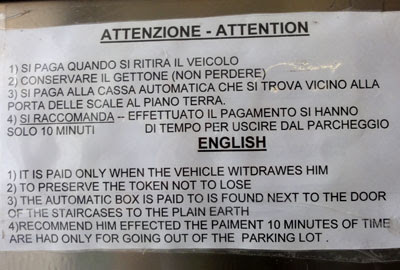 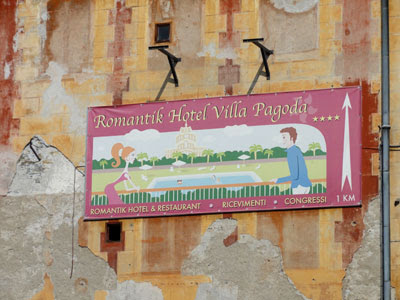 Back from 3 weeks in Italy-- in L.A. and it's nice to be home. Molly's here too. I'm in a "don't operate heavy machinery" state of mind but couldn't resist posting that first sign.

We had a great trip and it really helped that I suffered through several years of Latin in junior high as language wasn't really a problem.

Just one story. We were really, really lost as we pulled into Nervi, and the highway exit was up so high it felt like the Wild Mouse ride at Wildwood, New Jersey. Jon said, "Go in that grocery store and buy a map." So I walk into the store, stand in line, and then in pidgin Italian I say, "I sell map of city."
Posted by Sally at 4:29 PM 9 comments: