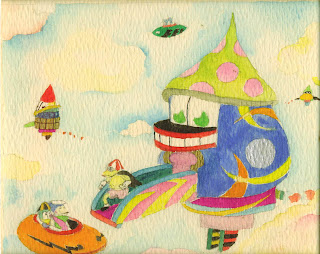 UPDATE Feb. 14: (relisted, url is current.)Since some of you who stumble by are "Quasi at the Quackadero" fans, I thought I'd point out that I'm selling an original watercolor sketch from the film on ebay this week. This is an idea sketch I did before I ever started animating the film.
Posted by Sally at 9:31 AM 4 comments: 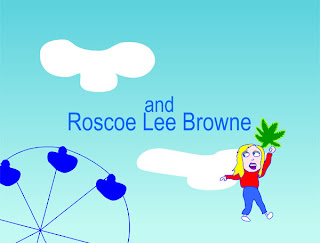 I had SO much fun designing and animating the main titles for Gregg Araki's "Smiley Face", which premiered over the weekend at Sundance Festival in Park City.
Posted by Sally at 8:57 AM 2 comments:

Some Days it all Falls Down 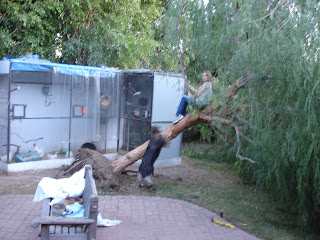 Did the weight of Dinah knock over the tree?
Did Molly the German Shepherd pull it over?
No, the nasty nasty winds knocked over our lovely pepper tree. The tree man said pepper trees never survive repositioning.

Then later in the day when I backwashed and rinsed the pond, I somehow got the valve stuck. When I went out in the dark last night, to put the roosters in the garage, I discovered the pond was almost entirely drained and the koi were gasping. Emergency work restored their home at least.

Then this morning got an email from the nice fellow who hosts my site saying the hard drive holding all my files was destroyed.

The chickens weren't happy about their loss of tree. Anyone want a gorgeous silkie rooster? We have one too many.
Posted by Sally at 1:03 PM No comments:

Some of you may have had conversations with my talking horse Whinsey, a chat bot I built myself over the years with a code brain consisting of regular expression in JavaScript, and a lot of php backup from various search engines.

For those who don't know, a chat bot is a character that you can talk/type to, who attempts to answer reasonably, and in my case I tried to make her funny too. I used a php script to grab an image off of google images, so the funky tv in Whinsey's barn would show an image related to what you were talking to her about, while she "spoke" (text only) her response to you.

As search engines have gotten more and more personable and astonishing, the effect of the chat bot began to seem last century, to me at least. The various chatbot contests were seeming increasingly inbred and rigged.

I did see an amazing chatbot yesterday, missdewey.com
Not sure who's claiming credit for that. If anyone can tell me how that super real flash/live action effect is accomplished, I'd love to know. It's not that she was so smart, and her answers were kind of lame, but the presentation was superb.

Today I learned my server had lost ALL my files, and though I could put Whinsey back together again, every time google or answer.com or thesaurus.com changed the layout of their pages, all my pretty php scripts ceased to work, and it seemed like a good time to retire the talking horse. She's still a continuing character in my flash animation.

Just as an aside, code freak that I am, I'd written a log script that logged everyone's conversations with Whinsey, though it never id'd them. All those logs vanished yesterday too. Probably just as well. Another reason I took the horse gal off line is I was tired of reading all the hot and dirty things people typed in. I mean, I worked hard for her to have a response to "Who was Sylvia Plath?" but most people just wanted to talk about sex with Whinsey.
Posted by Sally at 12:45 PM 1 comment:

Labels: flash, techno, the past, think about it 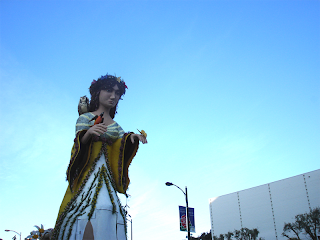