copyright Cindy Hunt
I got a friendly email out of the blue from Cindy Hunt, and took a look at her blog and her artwork and thought they were both intriguing and delightful, so here's an introduction. She lives in L.A. This picture is cut paper- ow- never felt that safe around exactos! There are so many talented women blogging and creating interesting artwork- the world has no idea!
Posted by Sally at 6:53 PM 7 comments: 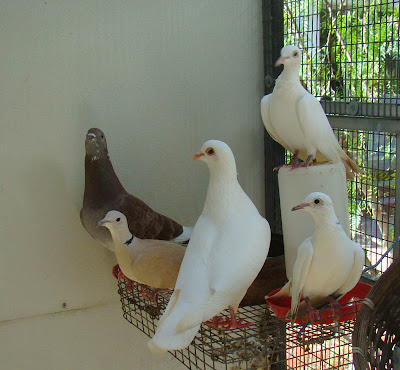 I've decided, reluctantly, to find new homes for my birds, and it hasn't been an easy decision. First I posted on a pigeon forum, and got some weird responses there, none of which really worked out.

So I took the craigslist step. The first week, just offering the least desirable set of birds, I got a flurry of emails from a guy who could barely spell and didn't seem to know where Hollywood was, much less Northridge. When I suggested a specific place and time to meet up he panicked, "not so fast!". Like we were going on a date or something.

So I waited a week and posted today. Here's one of the responses:

HELLO ! IS BIRDS STILL AVALIABLE ? I CAN PICK UP TOMMOROW MORNING & OFFER YOUR CHOICE SODAS THESE FOR MY RETIRE DAD HE HAD BIG AVAIRY IN BACK YARD IF STILL AVALIBLE PLEASE CALL 714-***-**** CELL. THANK MUCH.
PEACH & BLESSING


the soda part really stopped me. But sounds like a nice guy and I wish him much peach.
another one:

that one was formatted at extreme right of email in tiny letters. Anyway, later today a woman contacted me and I could hear birds in the background. She said birds are her hobby and she would possibly take them all. She's going to contact me tonight or tomorrow. She sounded really nice.
Posted by Sally at 6:04 PM 8 comments: 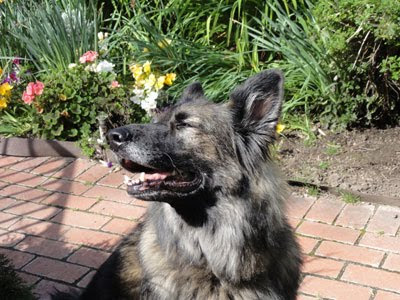 When I was walking Molly this morning I came upon a trainer and his student. He was a boxing trainer and they were exchanging fake blows and doing the boxing dance in the grass. Molly did NOT like this at all. Her parents are both working police dogs.

I could barely pull her past these two guys. She wasn't growling but she was really concerned, as if she felt somebody needed to step in and handle this disorderly situation. "Woof, I mean What seems to be the problem here?"

I got a new camera, Sony's latest Cyber-shot, and am trying to make sense of it. It seems easier to understand than other Sony's I've had and dropped. It actually has a pet setting! That's what I used for this photo. No idea what it's doing for pets. It also has a smile detector.
Posted by Sally at 12:37 PM 12 comments:

The very bad not good Granny (not my mom) 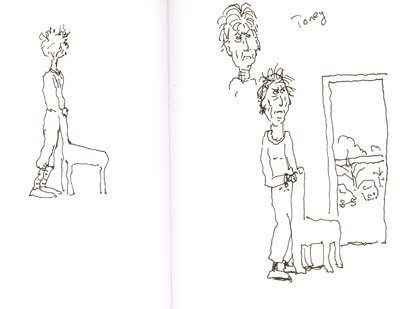 I went to visit my mother this weekend, aka "fun in the nuthouse".
As I came through the glass door on Friday morning, Toney, pictured above, was poised very still by the door waiting for her big moment.

The door was open and she ran out. Shouts of "TONEY!" and I turned to run after her but the same nurses aides called out, "Don't chase her, she's dangerous!" as they rushed past me.

Toney is 100 years old. She stands very straight and has a full goofy white haircut which you can see I could never get right in my sketches. She was RUNNING- she's 100 years old but she was running, and she jumped on the bus parked at the entrance. When the nurse's aide jumped on to catch her, Tony ripped off the aide's top "exposing her to the world", and scratched the aide too. She told her, "You have an evil heart and God will never forgive you."

Woah! No wonder my mother's one of their favorites. They say Toney is wearing a bracelet which locks the doors when she gets near them but she's figured out how to stand just out of lockdown range and then break out when someone opens the door unsuspectingly. She's 100 years old! She moves like an athlete.

As for my mother, her trip continues, but now it's sometimes by rail. We were in Florida on Friday and in England on Saturday. In England I was trying out for a stage role, but she didn't think I'd get the part. Something about not being forceful enough, and she wondered why I was dressed like I was Chinese. ? She carries on a monologue that's filled with curious details and funny comments, but I had the feeling I could have been there or not, for all the real impression it made on her: "so grand that you could come, taa taa".

When the 300 plus pounder nurse's aide waddled in to the small room where we were hanging, she said, "It's my husband!" My father was tall and slender and looked like Abraham Lincoln.

It was stuff that was funny but when it's your mom it isn't so funny. And there were all the other patients which I could have fun describing but I'll leave it alone. I only knew how to spell Toney's name because they've posted a sign for her on another door telling her to turn back (before it's too late?)
Posted by Sally at 4:03 PM 20 comments:

Labels: eek, life, think about it

I'm taking a break from the blog. I'm traveling to see my mother in a week, and getting ready for a trip to Italy in April and return to Colorado in May. I don't have a laptop at present and am a little worn out from blogging for so long. "And then I wrote". So turning it off but not shutting it down.
Posted by Sally at 2:41 PM No comments: