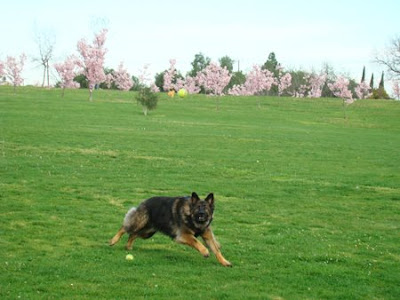 Monday morning we met with the scent trainers and learned basics on how to teach a dog to follow a scent. With Molly's police dog background, (ma and pa) she figured it out really fast. It involved hiding a tennis ball in one of many boxes, then switching them all around like a shell game while I held Molly back. She gets released and has to find the ball. Because she has such high ball drive, as you can see in this picture, she really wanted to find the ball. I'm looking forward to further training. The trainers were very friendly and explained things clearly.

That night Molly started agility up again, and ran all around the course eagerly. She slept well that night. I didn't. The day was too exciting.

The next day we went to see Pepper. In addition to his usual stash of bananas and apples he got sugar cubes, carrots and even a Persian cucumber. He looked a little out of it. Molly was locked in the car.

The stable owner and a young woman were about to wrangle a very ornery and enormous one week old colt who had already kicked his new owner twice. The colt had a skin infection on his butt, (scours?) that needed to be wiped clean. I said I could help if they needed help. They said come on in. (3 women, one colt.)

He'd never had a halter on and was in a big paddock with his mother. The young woman, Rachel, had a plan to get him by the fence and pin him there while the stable manager, who's older than I am, would wipe him.

She got him by the fence, pressed all her body against him and grabbed his tail straight up. He made an unworldly noise, like a pig from hell, which then set off all the stable dogs who were lunging in towards the colt. The mare (mom) was very upset.

I got a halter on her and pulled her away. She kept lifting one front leg and then the other stretched as high as she could. Rachel lost control of the colt. He ran off to the other side. I let the mare join him. We tried again. I held one of the dogs too. This time Rachel repeated it all, and held him longer, and we all petted him a little. By the end, he wasn't fighting, but he was trembling.

Sounds awful, but that owner should be awfully grateful to Rachel, because you need to handle these babies right away or it just gets harder and harder, especially with little studs like this one.

Too bad the camera was in the car with Molly. Pepper and his bud watched the whole thing.

Another action shot at Lake Balboa: 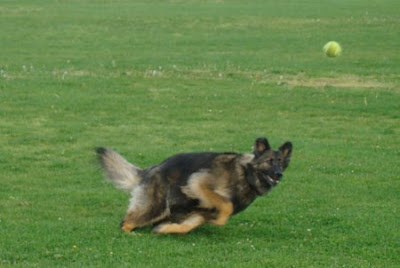 and a dopey "honey, stand by that cherry tree" shot, happening simultaneously all around Lake Balboa this week. 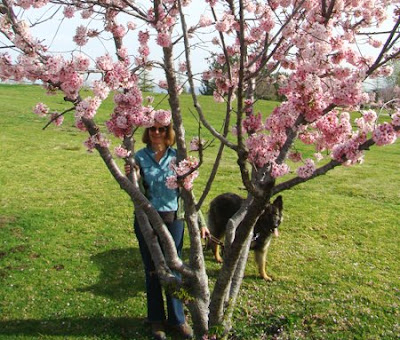 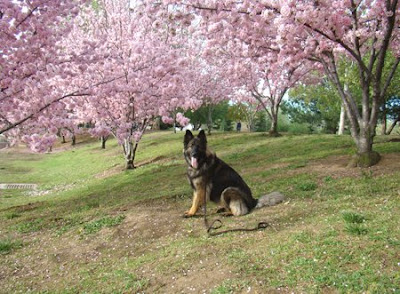 Molly's tongue matches the cherry blossoms!
I never knew colts could be such a handful. I guess it makes sense- even though they're domesticated, they they're prey animals and probably have the flee first, ask questions later mentality.

More great Molly pictures! I wish I could draw a series of ball action shots, but the focus is difficult o the ones I've printed out so far. Love the Molly in front of the cherry blossoms shot! Could I have that high res? Thanks!

Namowal, I was surprised by this colt's intensity. Years ago we had a Welsh pony who gave birth to a filly and you could hold the filly in your lap the first week.

Sal, I'll get that photo to you this weekend.