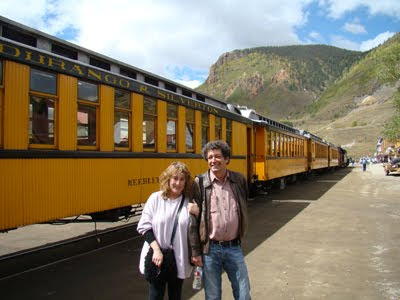 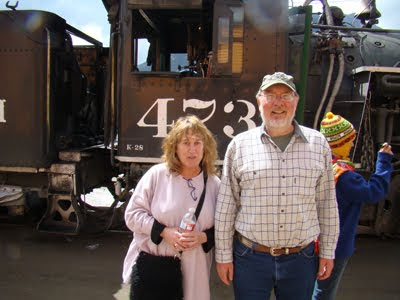 We took our friends Anne and Danny over the million dollar highway to Silverton on Thursday. We got there just as the steam train was pulling in and the streets were flooded with tourists. 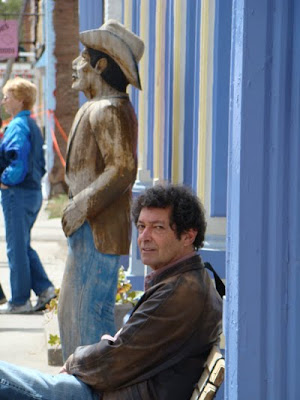 You could hear a lot of different languages on the street, as well as a saloon piano, which is a lovel sound. I guess it's the season when foreign visitors come to see the fall foliage. Quite a few were calling out to their friends in Italian. Danny looks like he stepped out of a foreign film in the picture above. 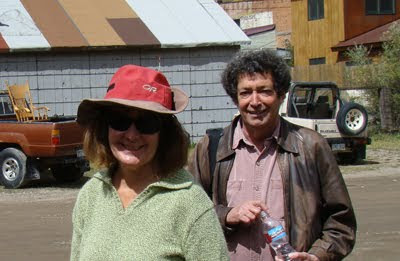 I cooked fried chicken, trout almondine and lasagna. Jon cooked bison steaks the last night. We had a jolly time.
Posted by Sally at 4:50 PM

Mmmm bison steaks! I've always wanted to try them.
I was going to cook trout myself tonight but the store was out so I cooked salmon instead.
How is the fall foliage out there? I bet it's pretty.

I always love seeing your picture in the red hat, Sally. So glad you had fun with your friends' visit.

about the lasagna, umm.. I have a great recipe, but as I looked through the closet I found I only had one can of tomato sauce, and it was dated 6/95. We date our canned food when we buy it.

oh, what to do. well I didn't tell anyone, opened it, tasted it, seemed JUST FINE, so I used it and it was just fine. But 14 year old sauce...

all the newspaper boxes I saw were empty.

No wonder your friends come to visit. You cook such good food, its a wonder they leave.

I would think 14 year old tomato sauce would clear the table.