I spent the afternoon at Santa Anita today, where admission was free and hot dogs, popcorn, and beer were one dollar. The weather was fine, and it was a great way to spend an afternoon. I think I came out ahead on my bets, but I wasn't inspired.

On the left is a horse named The Pamplemousse, who's my choice for the Kentucky Derby, and I hope he makes it to the race. He's stabled at Santa Anita. He's an unusual color, called a gray roan, but actually sort of a lavender color. I wrote about him once before here.

Look at his blaze, the white strip on his face, and compare it to the horse on the right, my first horse Luna, a great great horse. In that picture she was already past twenty. She was also a roan, which is defined by white hairs mixed with color hairs. She was half Thoroughbred and half Appaloosa.

Can you see why I can't take my eyes off The Pamplemousse with that Luna blaze on his face? (It's an unusual marking.) His next big race is a week from tomorrow at Santa Anita. Guess where I'll be?

Oh and this is a wall mural at the Santa Anita racetrack, right across from where you get the one dollar hot dogs on Fridays. 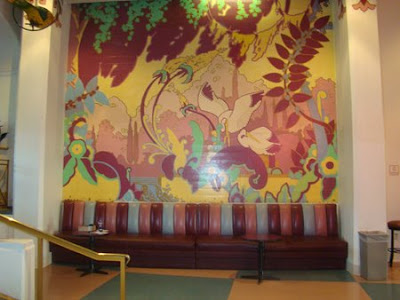 Love the stripes on the cushions. Should have sat there to eat the hot dog instead of gobbling it on the escalator.
Posted by Sally at 6:32 PM

Wow, Santa Anita is a bit snazzier than Hollywood park. Nice mural. Sort of art-nouveau-meets-art-deco.
Since Luna was part thoroughbred, is it possible that she's related to The Pamplemousse?

Amazing resemblance between the 2 horses!

How was Luna different from Pepper? What I mean is, when you say a great, great horse, what you mean. Is it your feelings for her? Was she also a great racer/jumper or well-mannered or a thoroughbred? (Or all of the above.) I'm going to draw a picture of Pamplemouse.

If you go far enough back she'd be related because all Thoroughbreds descend from the same stallion, but the marking is just coincidental.

Luna was an exceptionally sweet horse although she didn't like to be petted. I rode her on mountain and canyon trails for years and she was very reliable, almost never spooked, watched where she was going, never bucked. She had lovely comfortable gaits. She could calm down nervous horses if we rode with other people. Once we even came upon a mountain lion together.

When Dinah started taking riding lessons I moved Luna to another stable where I started jumping higher and I wanted a horse for that, so I bought Pepper. Luna became Dinah's horse, and was such a great horse for a child.

She became very swaybacked as she got older but retained her sweet sweet disposition and was used as a lesson horse at the stable after Dinah bought Tia.

Pepper was very different. He was lots of fun on the ground, would talk to you as soon as he saw you, loved any treats and got overly excited about them.

He was a big gorgeous guy but he spooked easily, and would sometimes buck on the landing side of a jump. For a couple of years he won many ribbons and jumped as high as four feet. Trail riding on Pepper was a scary adventure and I soon stopped that.

I could seriously hurt myself eating $1 hotdogs.