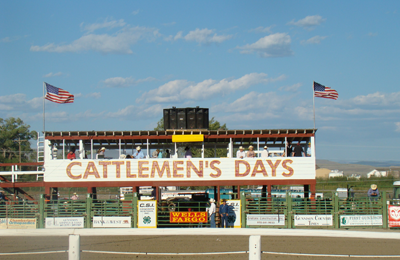 The actual rodeo in Gunnison is a big affair, three nights of rodeos, with riders who have competed and won at the National in Las Vegas. They were earning points for that here. The announcer kept a constant patter going and there was never any down time... 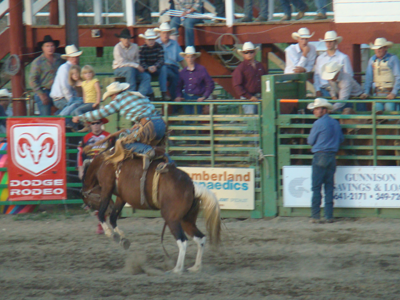 except for the riders coming off! 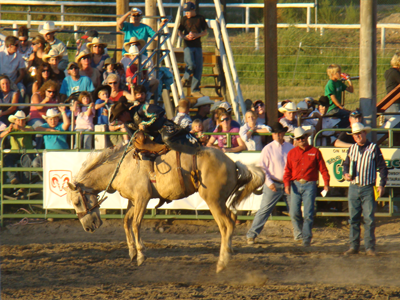 I enjoyed the Tie Down Roping the best this time- just one guy, a calf, and the guy's horse. He chases out after the running calf, ropes it, then ties it down while his horse steadily holds the line, keeping a balance to the rope.

But what I liked the best was this: they let us bring Molly into the grandstand. We sat on the top row. 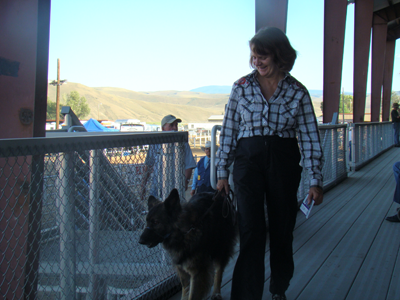 At intermission Jon went out to get a beer- it was the clown act which is usually horrible. But this time the clown brought about five ducks out and a herding dog, and did an act that involved the dog herding the ducks.

Molly got really intent on the act even though we were seated so far away. She started shaking all over, and when the clown said, "Go By", a herding term Molly knows, she started this weird howling that caused a lot of people in front of us to turn around and stare. It was hysterical. She's never herded ducks but she knew exactly what it was about. And the sound she was making!!

We left during the bull riding, and were glad we did because it sounded as if somebody got hurt as we were walking out.
Posted by Sally at 9:40 AM

I love the part about Molly and the clown and the ducks. (The clown saying "Go By.")

I wish I had a shirt like the one that cowboy's wearing in the 2nd picture.

Maybe Molly was trying to say "I'm way up here, boss!"
Too funny!

Namowal, I think you got it exactly!

I would have loved to see Molly enjoying herself.

My ex used to be involved in the Jaycees who ran the supposedly world's largest bull riding competition. One year a rider was taken out on a stretcher and I was standing in the exit ramp close enough to hear his breath whistling through the gore-hole in his ribs. He was laughing, or trying to. It seemed to bother me a lot more than it did him. I got woozy.