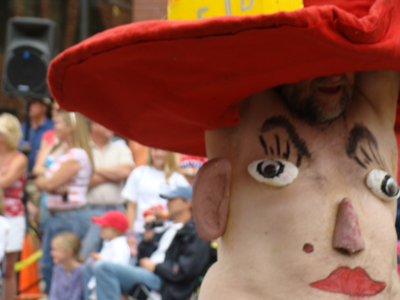 It was a big crowd at the Telluride July 4 parade today, and there were a couple of really entertaining parade groups. 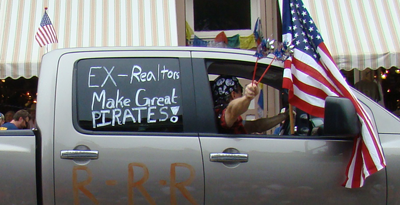 There was a lot of soaker gun crossfire and many almost pointless parade drivebys, like dirty trucks with Rotary Club emblems on the side.

The best was a float called "Live like it's 2006" with sexy shucksters on it, or dancing beside it, doing the Bernie Madoff thing, coming up to people and telling them to buy stock in GM because it's going nowhere but up, pitching all sorts of bad deals of the last few years. These guys were really in the role, with 3 piece suits, champagne bottles, cel phones: the details were better than what I'm describing. 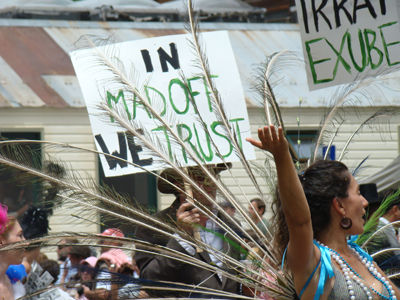 One guy had a lawn blower that was blowing out monopoly money at the crowd. 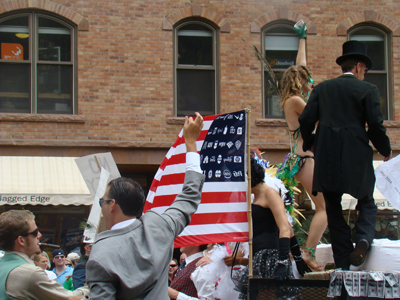 I'm not sure but I think those may be webdings on the flag.

It took us a long time to get home. There was a dirty maroon car in front of us on an otherwise empty road. Jon thought it was just an old car but I said "I think it's a Bentley or a Rolls Royce." Something about the shape of the back window.

When the car turned the corner for the big highway I could see the silver phantom lady hood ornament I know because my father loved classic cars. It was an old Rolls Royce. We could see a man driving and a woman next to him. I bet it was Darryl Hanna and a rich boyfriend. She has a place somewhere around here.
Posted by Sally at 5:44 PM

That "live like it's 2006" act was brilliant! Monopoly flying all around! Hee hee.
I bet those webdings on the flag were corporate logos- probably protesting their political influence.

Lord, you are having fun!! Go, Sally!

I love the face in that first shot.

Telluride had the best parade I've heard about. Love the guys in 3 piece suits and leaf blowers blowing monopoly money.

Was Darryl Hanna wearing a Don't Shoot the Moon t-shirt? I think my sister sent her one.

Yes, the first face is great!

I wanna be there!

Glad you all enjoyed the description The 2006 act was better than what I described. There was a doo dah parade style entry called "Men Without Rhythm" which was also quite enjoyable.

The food was barbecue chicken and meat, roll, potato salad, ear of corn, beans and watermelon.

They have recycling down so well they can even compost the plastic forks. Only the foil butter squares had to go in the trash.