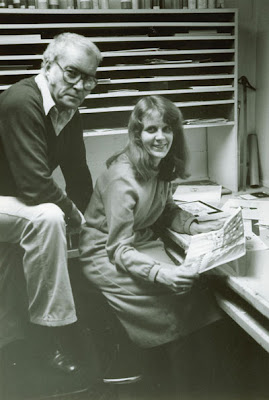 This morning when I got up my friend Michael had emailed me that my film "Quasi at the Quackadero" had been included in 2009 National Film Registry.

"The National Film Preservation Board members enthusiastically supported this addition to the more than 500 U.S. films now recognized as "culturally, historically and aesthetically significant" and worthy of preservation."

I want to toast E.E. Gregg Snazelle. Right after college I rented an editing room at Snazelle Films in San Francisco so I could finish my third film, "Chow Fun." Gregg saw the film and offered me a job at his film company. The job was to experiment with animation, and do commercials for him when the jobs came in. He also hoped I'd figure out how to solve 3-d without glasses.

He encouraged me generously without ever paying much attention to me. These days if an opportunity like that even existed, you'd be forced to sign all kinds of rights statements for characters and content created, but this was before "Star Wars" and he just seemed to be happy to have me around. We were never particularly close. It spoiled me for any job after that.

I made all my "Quasi" films while I was working at Snazelle. Unfortunately he's no longer alive, but here's to you, Gregg, with a big heart and much thanks.
Posted by Sally at 1:24 PM

Labels: cartoons, the past

I raise my glass to you! Cheers and huzzah! Getting up now to do a little "victory boogie".

I've congratulated you on Linda's blog and on Facebook too, but three times is the charm.
Yay Quasi!
Yay Sally!

Congratulations! How smart Gregg was to give you that great opportunity.

Here's to Anita and Quasi.

What an incredible story about Gregg and Snazelle films. What a job!!

Thanks Mean Jean, Namowal, stray and Linda. Wish I could break out a bottle of champagne for us all to share.

How sweet is it, to have the combination of a generous of spirit employer and a willing to run and play with it animator? It's wonderful what you did (and continue to do) with the space given you. Thanks for the zest and the fizz and the fun!

Congratulations! I first saw Quasi five years ago and it's been one of my favorite cartoons ever since

thank you, Mr Snazzelle!
may you know the number of smiles you've generated!

Great story. Really indicates how radically life changed, within a short period of time. When did you start working? Then we'll know when $350 went far in San Francisco. That's really back in the day! As you said, you'd have to sign over rights these days. And few would let you just be creative, just like having a free spirit around.

That's why so many of us are working for ourselves, but struggling cos of high overhead, cost of living. Where can you live for $350/mo today?

ARTISTS NEED PATRONS. A little patronage goes a long way. Thanks for the memories, Gregg and Sally!

It thrills me to bring attention to Gregg and his generous spirit. This was 71-81. I rented a nice apartment at Arch and Hearst in Berkeley for $140/month, split with bf.

Such wonderful news. Now Quasi can be enjoyed for generations to come. Congrats!

Loved this tribute to Gregg. I fondly remember time spent in your upstairs space and at lunch outings while I was there. Gregg would be so proud of you now, Sally, as he was then.

And the photo of you with Gregg is wonderful!

Oh Jane! (prb) You know what I'm writing about so well. Thanks.

What a wonderful picture and tribute. It is an inspiration to everyone - one never knows how profound an impact an act of kindness can have. Who knows how many artists Quasi has inspired, and whom those artists have inspired? Thanks for all your good work, Sally and Gregg!

This is so good, this is a Happy New Year already, this reminds me that my rent was $60 a month when I first saw Quasi. Quasi's sense of history and occasion has real power, traveling the time waves, receiving acknowledgement. Nice to read of how he came to be.....Kate

It makes me really happy to bring attention to Gregg Snazelle who was so generous to me.

Sal, congrats to you for the award. Quasi and Anita must be proud. Your shorts are the best. BTW, you mentioned Chow Fun on your post. Any chance of you uploading Chow Fun or Ducky to your YouTube account? I've been wanting to see those for a while now. Sorry for the long post.
SamtheCruikshankFan

p.s. Did you tell yr mother about the award and was she able to understand?

Thanks, Sam. I should have uploaded those two at the outset. They're on my dvd. Maybe I'll get around to it, but having some computer problems.

Linda, it's harder and harder to talk to my mother. Today she said she'd had a wild day yesterday, gone over a dam in a rowboat but fortunately there weren't any babies on board. She said it was actually kind of fun. I told her I was at a lake too (called from Lake Balboa.) She said, "That's fine. I'll see you when you get home."

Thanks for replying, Sally. Going over a dam in a rowboat? That's... intresting. Also, it's pretty tough to forget what you have or haven't uploaded. I can't buy the DVD, so, maybe, you'll have the two uploaded by St. Patrick's Day? Just a prediction. You have two months. Ready, set, go! Hope you can get your computer fixed in time.
SamtheCruikshankFan

Congrats! The first time I saw Quasi I almost fell out of my chair. What an amazing, unique, creative talent! Great story about Gregg, too. Those bosses who leave you alone so you can create are few and far between, that's for sure.

Your blog keeps getting better and better! Your older articles are not as good as newer ones you have a lot more creativity and originality now keep it up!

Thanks Lisa, Sam and Mystery Guest. I decided to leave this post up a little longer since I've never had such a great chance to honor Gregg.

Gosh, i hope your mother didn't fall out of bed. Do you think they have Wii rowing? I love "I'll see you when you get home." That's sweet and makes me miss my dad.

Sally,
Found your blog again at just the perfect time. Congratulations! Your years at Snazzelle paralleled a few of mine working at Social Services in SF with many playwrights, poets and other artists, among them Terry Zwiegoff. Although I was clueless in general at the time, I am enjoying thinking back to those good old days in SF. Happy to know about Quasi being preserved as part of American heritage! -Greta

Thanks, Greta. I used to have lunch with Terry on Market St. around that time. Those days...