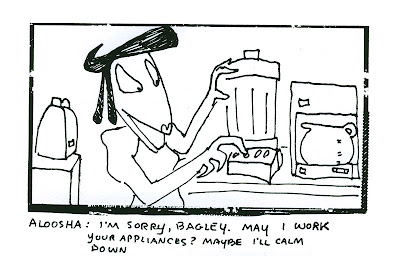 So the day is finally almost here. We leave for New York in the morning and then for Italy on Friday.

We have to take Molly to the kennel this afternoon. She senses something's up. It's a nice place where she's staying, but it's the hardest thing about traveling for us.

I posted a silly storyboard for my section of Toons x 9 here. The illustration above is from the storyboard. Just something to keep you laughing. It was a peculiar project- 9 animators retelling Faust.

I opted for a soap opera approach to hell- at the time airlines weren't as nasty as they are now and computers weren't part of most people's lives. I didn't ever color it in and got rushed to even scan this and put it on line. I never saw what any of the other animators did. In fact I don't even know who they were. Marv Newland (Bambi Meets Godzilla) paid us to do it. Faust is no treat to read, let me tell you! The link is slow to load even though I broke it into segments, and you'll see a white screen before the loading symbol kicks in.

One more thing about the toons project. Aloosha was based on a woman I met the last time I was in New York, 22 years ago! Her name was Lizzie Borden and she was a filmmaker who hoped we'd collaborate on something. She had that "I work out all day" look. I forget if she was a kleptomaniac or not!

I had insane good luck at the track last week and will buy a new tablet computer when I get back, and I guarantee no way in hell will it be a Mac.

Don't even get me started on Steve Job's arrogance re Flash, when you can read it in the paper anyway!

Have fun while I'm away, and hope to check up on you all from an internet cafe in Italy.
Posted by Sally at 11:10 AM

I know that Molly is the hardest part.

If Aloosha's based on the Lizzie Borden who made Working Girls and Love Crimes, Tom worked on her movie! Maybe right before you met her.

I caught your Faust in Toontown treatment earlier. It was a howl. (And, as you said, strangely prophetic with the computer and the evil airlines).
Have FUN in Italy! Where will you be visiting? Have you been there before?
(You can tell us later if you're strapped for time).

What a fun tiny itsy bitsy worldie, and all spinning around a woman with the coolest name: Lizzie Borden!!

AND a souvenir before you've even left. Wow!

Are you there to see the great art? I'd love to go someday. :D

Do you speak Italian?

I hope you have a lot of fun!

Wow. This is fabulous -- all the great details; soap opera approach so much fun. Having to read Faust doesn't sound fun.) I love "Kiss me or I'll steal you blind!" You were really ahead of your time with Sado Air. The heart falling down the stairs is a nice touch. That's wild about Tom and you both knowing LB.

Are you ash bound?

Are you back with Molly yet?

I've never read Faust, but if it's anything like this I can see why it's a classic.

I loved the ash tray collection. And Buddy is just great. The time share (genius). Why, though, am I craving burnt cookies with Spray Cheez?

I must admit the spray cheese reminded me of someone I know eating handfuls of Reddi WIp.

funny about those snacks!