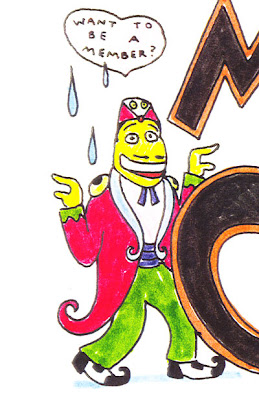 After I posted this little cult outfit on Facebook I tried to find the original storyboards for the animated/live action feature which I wrote in 1982. It seemed all that was left were some beat up xeroxes, but after I'd scanned a bunch of them I found the original four volumes of pictures.

I've popped them into a little presentation which is on line here. A few of the storyboard pages were in full page comic strip format so when I separated the individual panels I had to blow up the images quite a bit.

Let me know if it's hard to navigate- I was feeling a bit lazy when I put it together. It's just the first act or so but there's some funny stuff going on.
Posted by Sally at 3:42 PM

Labels: Anita, cartoons, the past, weird

That's pure zaniness.
And a risque departure from your Sesame Street work!
Also it's remarkably non-dated for something that was written in the early eighties-
Cheesy salesperv personalities, airport security, catty ladies and very bad dogs are still relevant today.

You've been keeping this from us and just when it gets good you make a hasty exit.
Take us back to the Pajama Lounge!
And don't ever EVER show me that congeniality chart again.

Mars T, I should have put a loading animation on the front end. It's a really big file. Glad you two got a laugh. If I were doing it now I could get into the undressing aspect of airline security.

Aaaawh, what a genius idea - the live action serial sort of steering things! I'd love to be amazed that you got no traction, but even now, when the viewing audience has been essentially trained to go for a ride, 'worlds with their own logic' tend to befuddle. I, for one, am convinced this would not be so if people read more, but ... that's probably because I'd really just love it if people read more. Ha.

Anyway, this was a serious big treat, like an actual show. I could, I guess, watch storyboards as easily as the finished product. There's an idea!

Great fun! Pickles, pajamas, the bat in the belfry! The shape of TV screens at the time.... And where can I get an outfit like that?

This is wonderful! I am so glad I found your blog. :D
I want to see what happens next.

wow, how weird is this- I think I was kicked off of Facebook because I linked to this storyboard!

It's a conspiwacy for sure. Cuz you're still showing up when i open Facebook.

I'm still getting facebook emails of comments but when I click on them they go to page not found, and I can't work my farm anymore etc. When I click the facebook home page it comes up white and empty. Well so it goes.

oh and there is a second chapter up at funonmars.com/ltmyc2.html

Did you get Facebook fixed? I'm a Facebook dope - although I DO have eleven shiny friends!! I went looking at your Facebook page and it exists! (I'd have begged you to be my friend, but I don't know how to do that. That's okay. I'm happy to be your friend here)

ANYWAY. PART TWO is, as Namowal said SO well, ZANY! I thought that maybe, MAYBE, I just loved the storyboards because they're so rare, but this is really like a comic strip, isn't it? Are you not just a little tempted to bring just a little bit of it to animated life? It's so very clever. And zany.

Thanks for posting these wonderful storyboards. You have so many fans nowadays who really get this stuff.
And your FB page still loads for me, as does your farm. And there is still good ole td....

Probably the single most awesome thing I've ever seen. Imagine my surprise at all the profanity. But still, it's just amazing. Also, this is the first official appearence of Rebozo? I always thought "Whinsey on the Phone" was his official debut. Thank you for all this mind-blowingness. Plus, I can imagine the original crew you worked with at Snazelle, and voice the characters. Who voiced Quasi and Snozzy, by the way?
SamtheCruikshankFan

Just read the second part. Not as mind-blowing as the first, but still mind-blowing. Spotted something that's naughty that would pretty much would help it give it an R: Pickles humping Anita's leg. Much rowdier than Quasi at the Quackadero and Make Me Pyschic combined. But still, this is my favorite unproduced film, and I haven't seen it all! Keep it coming!
SamtheCruikshankFan

Thanks for the lovely comments. Scanning isn't one of the world's most enjoyable time fillers- spent most of the last two days scanning a whole other storyboard that's dark and funny, but there are so darn many panels I can't decide how to present it. (165 panels???)

Not tempted at all to animate it. Let Nina Paley do it. ha

Let Nina Paley do it.

You doubt there are angels? What are the chances I'd read this and NOT have a mouthful of wine when I burst out laughing? Not good. Not good at all. And yet ... that's exactly what happened! We all came through it unscathed. Hahaha.

BB you really crack me up!